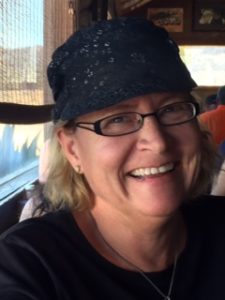 Laurie Scheer is the co-founder of New Nature Writers and a Writing Ranger. As a former vice president of programming for WE:Women’s Entertainment, Laurie analyzed manuscripts and scripts as they entered the competitive media marketplace. She has also been involved in producing series for the web, films for video games, and other digital based forms of entertainment and has mentored many successful industry professionals throughout her career. Laurie has been an instructor at numerous universities across the U.S. from Yale to UCLA. As a professional speaker, she has appeared at annual conventions, including the Willamette Writers Conference. As the Director of UW Madison’s annual Writers’ Institute, Laurie was the managing editor of The Midwest Prairie Review, and a writing mentor to hundreds of students (of all ages) in person and online. Her personal interest in Nature Writing stems from her love of the American Desert Southwest and from being an avid cyclist and hiker. As an Aquarian, Laurie has always wanted to bestow healing for the globe. She currently lives near Joshua Tree National Park, surrounded by cactus and mountain ranges that have many answers. Kristine Zeigler, Writing Ranger and co-founder of New Nature Writers, is a third-generation Californian. Zeigler’s most recent book, Cover This Country Like Snow and Other Stories is a collection of ten stories set before, during and after the water wars between the city of Los Angeles and the small hamlets in the rural communities of the Eastern Sierra Nevada Mountains. Her previous publication credits include Forge Journal, The Bark, The Peregrine, Charles River Review, Menda City Review, Ignation Literary Magazine, Barely South Review and The Saint Anne’s Review. Zeigler previously reported on energy and toxic waste laws and regulations in Washington, D.C. For the past 21 years, Zeigler has been an environmental non-profit leader focused on preserving nature with, and for, people. Zeigler was awarded a residency at the HJ Andrews Experimental Forest as part of an Oregon State University program to promote understanding of humanity’s role in nature. She serves as a member of the Board of Directors for the Mono Lake Committee and blogs about natural and cultural history at owensrivergirl. Zeigler lives in the San Francisco Bay Area with her husband Joe and holds a private pilot’s license. 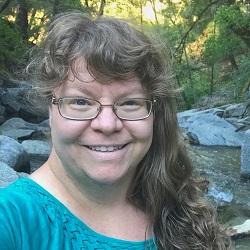 Carol Underhill is the Director of Marketing, Education and Outreach for New Nature Writers. Carol has been a communications professional and natural resource interpreter for the past 24 years. She is a Leave No Trace Master Educator whose goal is to inspire awareness, engagement and stewardship of public lands. Underhill lives in Northern California with her family and rescue pets and loves to hike, camp and photograph nature in her spare time.

What writers have to say about Laurie and Kristine:

“Write your book”.  Those three words from mentor extraordinaire Laurie Scheer got me through many dismal days. She is patient, down-to-earth, and so well versed in the ins and outs of everything writing. Through her I became part of a community when she referred me to people, blogs, and publications. In my year with Laurie I wrote two books, both of which will be published. Step by step: “Write your book”.  I’m so grateful she is my guide, and you will be, too.  – Nancy B.

“You (Laurie Scheer) have been a gift and a force for advancing the profession and wonder of authorship. Thank you for your contributions and guidance to the writing community.” – Melanie S.

Laurie Scheer has been my writing coach for the past ten months and has helped me tremendously. I could not have completed my first novel, Terralena, without Laurie’s constant support, encouragement and wise advice. Laurie was generous with her time and read all 35 chapters of Terralena, giving me guidance and valuable feedback. She was patient and nonjudgmental of my recurring punctuation and grammar mistakes, which can occur if a person had not had the opportunity of a good public education.Once I had completed my novel, Laurie continued to work with me develop a book platform by providing materials and reviewing my query letter, synopsis, chapter summary, and even helped me to search for similar books for my comparative literature review. She also provided links for searching for agents, publishers and platform designers. She kept me accountable and on track so that I could finish Terralena before my next job as a grandmother started.  –Victoria W

“Laurie Scheer is the best. She is a great listener as well as a great presenter/speaker. I had run into a creative roadblock and she has helped me get past it. I look forward to taking another class with her.” ~ William D.

“Laurie Scheer helped me discover the bigger picture of my project–will be going full speed ahead.” ~ Marian F.

From writers who have attended Laurie’s conferences:

“By the end of my time at the Institute I had gained confidence in my writing path, two new connections, and couldn’t wait to get home and write. Laurie Scheer and her staff are tremendous.” – Lesa K.

From writers who have worked with Laurie within the Pathway to Publication Mentoring Program:

“You have helped me so much by your comments and encouragement as I struggle through my first attempt to write a novel. I am truly grateful, Laurie.  Sometimes, I suffer from “Covid Guilt.” I was so lucky to have you as a coach. Thank you, Laurie! – Victoria W.

This program gave me structure, soft deadlines, boundaries, momentum, and an end-date. It was a valuable apprenticeship that I’m not sure I would’ve found elsewhere. I felt safe and acknowledged. Here is what I accomplished in twelve months: I increased my presence on SM, clarified the thesis of my book, perfected my query and book proposal, wrote an outline which solidified my table of contents, learned a ton about the difference between traditional, independent, and self-publishing. Further, I wrote 160 personalized query letters and blanketed the country with them. Laurie helped me soldier rejections and celebrate agent interest. I started revising and finishing my manuscript.” Maryclaire T.

You have Successfully Subscribed!