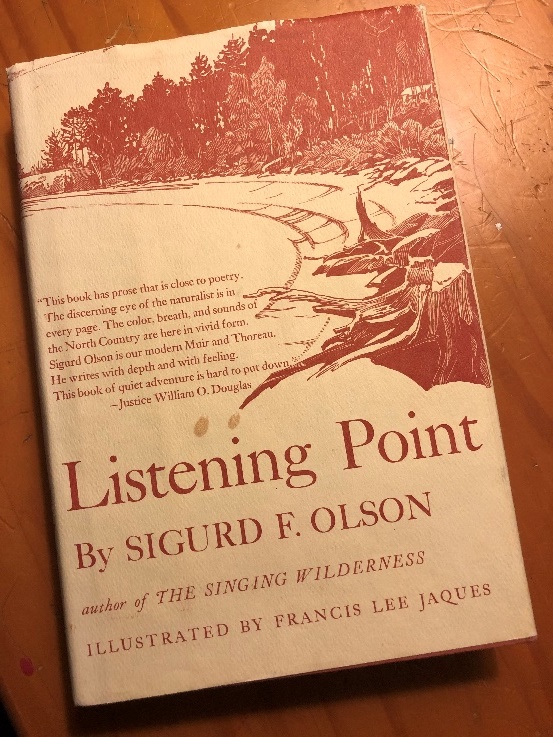 This week’s blog features one of our writers, Annette Drewes and her experience at a recent writing retreat. Annette is a writer, wanderer and wild rice whisperer. Her website is entitled Wild Rice Voices https://wildricevoices.com/about/

My first night at the Olson home and I pick up A Wilderness Within: The Life of Sigurd F. Olson a biography by David Backes. I have read Listening Point, Olson’s book written about a rocky point of wilderness on Burntside Lake, near Ely, Minnesota. I am familiar with the writer, but not the man. I flip to the middle and catch this phrase: “Sigurd was ready to try an experiment, hoping to find out if there really was a writer inside him waiting to break out (p.114).” Yes, I know this feeling. In fact, I was here in Ely for just that reason.

In his mid-30’s, married and with two sons, Sigurd secluded himself in a cabin on Bear Island Lake – just south of Ely for a few days over Christmas break. The pressure was enormous. Currently working in education, and as an advocate for wilderness, Sigurd wanted to develop a philosophy of wilderness. Instead, his notes show he came away from this self-imposed task empty handed.  “I am out here to write and find absolutely nothing to write about.” – Sigurd F. Olson (pg. 115). Thankfully, Sigurd continued to write and eventually wrote nine books, the first being The Singing Wilderness, published in 1956. In 1974 he received the Burrough’s Medal, the highest award in nature writing.

I arrived at Listening Point Foundation, the former home of Sigurd and Elizabeth Olson, late on a March evening with snow still on the ground. Struggling to finish a manuscript, a nine-year project so far, I too was secluding myself and hoping to make progress. I was also here to explore some of the earlier nature writers, writers who may have influenced Sigurd Olson. The foundation and I had reached an agreement earlier in the year. I could visit and in exchange for solitary writing time I would provide pieces based on my discoveries going through Olson’s personal library. A win-win deal.

Putting down Sig’s biography I step into the enclosed porch, with a window that runs the entire length of the east wall.  Soft light from the lamps scattered around barely illuminate the boxes of books laid out across 1/3 of the floor. In the room I can almost sense the man I never knew sitting across from me in a chair, legs crossed and holding a pipe in his right hand.

I reach into the closest box of books, recognizing the author who led me here, Fred Bodsworth. Two months earlier I had encountered his book Last of the Curlews. Published in 1954, Last of the Curlews follows the migration and courtship of an Eskimo Curlew, one of the last of his species.

“The male whistled shrilly and zoomed up in a final nuptial flight, hovered in midair high above the crouching female, then dropped like a falling meteorite to a spot about six feet from where she waited. He stood for a moment, feathers fluffed out and neck outstretched, then walked stiff-legged toward her.

When still a yard away, the male abruptly stopped. The whispering courtship twitter that had been coming from deep in his throat suddenly silenced, and a quick series of alarm notes came instead…The female was a trespasser on his territory, not a prospective mate, for at close range he had recognized the darker plumage and eccentric posture of a species other than his own. The other bird was a female of the closely related Hudsonian species.”

I followed the flight of the lone male curlew as he left the barren tundra and winged his way south to Patagonia in Argentina, wintering grounds for the once abundant bird. Putting down the book to work on my own was a struggle. I had arrived at Farm by the Lake to find some quiet solitude. Instead, I discovered a library of books once belonging to Richard C. Davids (1913-1984), founder of the Farm. Davids was a journalist and wrote the first textbook on conservation in the U.S. He was also an editor for Better Homes & Garden and Farm Journal. When I returned home to Bemidji (Minnesota) I sent out three inquiries regarding personal libraries of writers, and soon after was invited to Listening Point Foundation.

I pull The Strange One by Fred Bodsworth out of the box. A story of fiction about three individuals, two human and one a barnacle goose. Each finds themselves apart from their kind, and longing for connection and a sense of belonging in the Canadian Wilderness. The first sentence pulls me in.

“The barnacle goose was instantly awake, for even in sleep the senses had detected the change in the behavior of the sea.”

Setting the book down I discover an inscription on the title page. “For Sig, friend, mentor, voyageur nonpareil with gratitude inexpressible for making a voyageur of sorts out of me. Fred Bodsworth.”

Turns out that Fred and Sig paddled together for two weeks in the Quetico Park area, in 1950. The trip was organized to build support in Canada for wilderness preservation (Backes 1997). Fred Bodsworth, eighteen years Sig’s junior, would go on to become one of Canada’s preeminent nature writers. Last of the Curlews sold more than 3 million copies and at the time of Bodsworth’s passing in 2012, at the age of 94, had also been made into an animated short film.

Thanks for listening to my story. Who is on your bookshelf?

You have Successfully Subscribed!